The Niyamas are the inner observances and disciplines that a Yogi must practice in order to maintain a good relationship with him or herself. The first observance is Saucha, purity of mind, body, and living space. Cleanliness and purity are a matter of self-respect. A Yogi must remain healthy, and this requires exceptional personal hygiene. There are bodily cleansing practices called Kriyas or Shat Karmas that serve to remove toxins and impurities from the body. Some of these are quite invasive, such as the swallowing of cloth that is then pulled back out again to clean the stomach and esophagus. Others are more nurturing and passive. Cleansing of the bowels, the sinuses, the mouth/teeth/tongue, the ears, the eyes, and the stomach is done frequently. The six main kriyas include neti, dhauti, nauli, basti, tratakam, and kapalabhati. These are methods by which the Yogi may clean the sinuses, the respiratory system, the orifices, the eyes, and the organs. The Hatha Yoga Pradipika, a text written in the 15th century by Svātmārāma, is considered a foundational manual on Yogic Practices. About the cleansing techniques of Yoga, The HYP says:

Let’s explore the six kriyas as described in this most important of Yogic texts, verses 22-35.
Dhauti (धौश्चत)
A strip of cloth, about inches wide and 5 cubits long, is pushed in (swallowed), when moist with warm water, through the passage shown by the guru (the throat), and is taken out again. This is called Dhauti Karma. The strip should be moistened with a little warm and salted purified water, and the end should be held with the teeth. It is swallowed slowly, little by little. After swallowing it the stomach should be given a good, round motion from left to right, and then it should be taken out slowly and gently. There is no doubt, that cough, asthma, enlargement of
the spleen, leprosy, and all kinds of diseases born of phlegm, disappear by the practice of Dhauti Karma.

Vaman Dhauti
By carrying the Apâna Vâyû (upward moving energy) up to the throat, the food in the stomach is vomited. By degrees, the system of Nâdîs (Śankhinî) becomes known. This is called in Hatha as Gaja Karani (Vaman Dhauti). The Yogi swallows a large amount of warm, salted, and purified water and then vomits it back up. This is repeated several times until nothing but water is regurgitated. This cleanses the stomach of impurities, dilutes stomach acid during indigestion, and cleans the esophagus.

Basti अथ फश्चस्त्
Squatting in navel deep water, and introducing a six-inch long, smooth piece of an inch diameter pipe, open at both ends, half inside the anus; it (anus) should he drawn up (contracted) and then expelled. This washing is called the Basti Karma. By practicing this Basti Karma, colic, enlarged spleen, and dropsy, arising from the disorders of Vâta (air), pitta (bile) and kapha (phlegm), are all cured. By practicing Basti with water, the Dhâtâs, the Indriyas
and the mind become calm. It gives glow and tone to the body and increases the appetite. All the disorders disappear.

Basti is basically a more simple method of colon cleansing. Today, several methods exist to cleanse the bowels. Enemas, either with a saline solution or something stimulating like specially prepared coffee, can be performed using an applicator and an enema bag or a squeeze bottle. Colon hydrotherapy is a more advanced method, using a machine that gently irrigates the bowels using a very gentle water pressure hose, which then also suctions the contents of the bowels out, leaving the epithelial lining of the intestine clean and free from compacted fecal matter. This helps to combat colon cancers and inflammatory digestive disorders.

Sutra Neti
A cord (or catheter) made of threads (or rubber) and about six inches long, should be passed through the passage of the nose and the end taken out in the mouth at the back of the throat near the uvula. Then the thread is moved gently from side-to-side and in and out, and then remove via the mouth. This is called by adepts the Neti Karma. The Neti is the cleaner of the brain and giver of divine sight. It soon destroys all the diseases of the cervical and scapular regions. This technique opens up clogged nasal passages and removed compacted mucus from the sinuses.

Jala Neti
Jala Neti is performed by passing warmed and salted purified water (or herbal tea, ayurvedic oils, or purified cow’s urine) through the nasal passages using a small pot. One inserts the spout of the neti pot into onne nostril, turns the head too the side so that the opposite nostril is situated directly below the nostril with the pot inserted, and the pouring the liquid slowly and gently through the sinuses, repeating on both sides. Then, to clear the liquid from the sinuses, a modified version of Kapâla Bhâti is performed. Jala Neti clears excess mucus, bacteria, and dirt from the nasal passages, relieves breathing disorders and allergies, cools the head and relieves headache, and increases mental clarity and focus

Trâtaka अथ त्राटकभ
Being calm, one should gaze steadily at a small mark, until the eyes are filled with tears. This is called Trataka by âchâryas. Trâtaka destroys the eye diseases and removes sloth, etc. It should be kept secret very carefully, like a box of jewellery. Trataka cleans the eyes from dirt and debris, focuses the gaze and thereby the mind, and makes the eyes strong and clear.

Sit on the toes with heels raised above the ground and the palms resting on the ground, and in this bent posture the belly is moved forcibly from left to right just as in vomiting. This is called by adepts the Nauli Karma. It is performed with the air completely exhaled and the abdominal muscles drawn in and up, and then moved from side to side. Nauli removes dyspepsia, increases appetite and digestion, stimulates peristalsis, and makes the abdominal muscles powerful.

Kapâla Bhâti अथ कऩारबाश्चत्
When inhalation and exhalation are performed very quickly, like a pair of bellows of a blacksmith, it dries up all the disorders from the excess of phlegm, and is known as Kapâla Bhâti. The exhalation should be very forceful and completely empty the lungs, and the inhalation is passive. This is performed in sets of 50-100 and 5 times minimum. This pranayama exercise cleans out the stale air completely from the lungs, oxygenates the body and the brain, and raises the level of prana in the body. With sustained pranayama practice, the blood becomes more clean and hemoglobin levels rise, and the brain is oxygenated and stimulated for better cognitive ability. 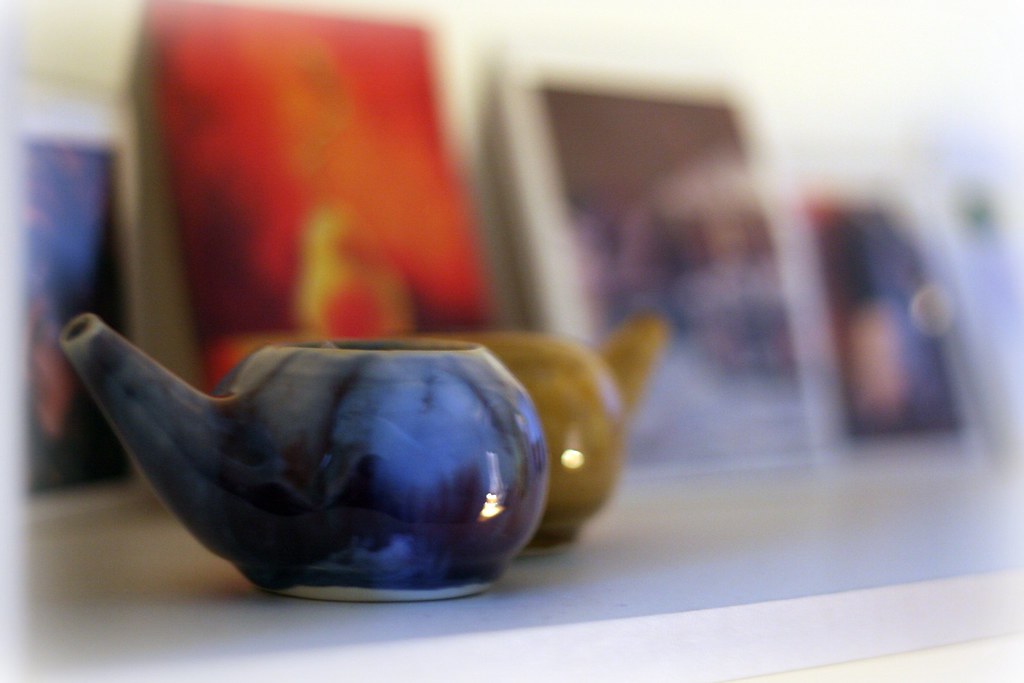